Oh Michael, you “Bublé” me away!

I have loved Michael Bublé since before it was cool to love him, and when my husband and I got the chance to go to his concert this past Friday night at CONSOL Energy Center with some of our best friends, we jumped at the chance!

Not only was it a beautiful Friday night in the Burgh, the concert far exceeded my expectations, and I cannot wait to see him perform live again.

I’m a very dramatic person, theatrical at heart, so of course I felt I had to be dressed to the nines to see Bublé. He’s such a classy, formal guy, and I wanted to be a part of his aura. As you can see from the pic, all of us stepped up our game for this special night and even though I was the only girl I saw wearing a bow tie, I’ll take it. I’m different and crazy and weird and wacky, and that’s me.

As we were taking this photo, a woman stopped dead in her tracks to tell my husband that he looked like Bublé, which made him smile, as that is not the first time he’s heard that, and looking at this picture, I definitely see the resemblance. Now if I could just get him to sing like that and wear suits and bow ties all the time… 😉

We found ourselves sitting in a Loge, which is by far the way to go if you are thinking about seeing a concert there. It was our own private section, with a bar for our drinks, purses, cameras, etc. Our seats were super comfortable, like glorified office chairs on wheels, and we had a good five feet of space behind us to stand up, dance, sit back, whatever! We also had our own waitress, so we didn’t have to fight the crowds for a drink, and the view from the Loge was SPECTACULAR. All the seats at CONSOL are pretty great, but this took the cake. Pictures don’t even do it justice. 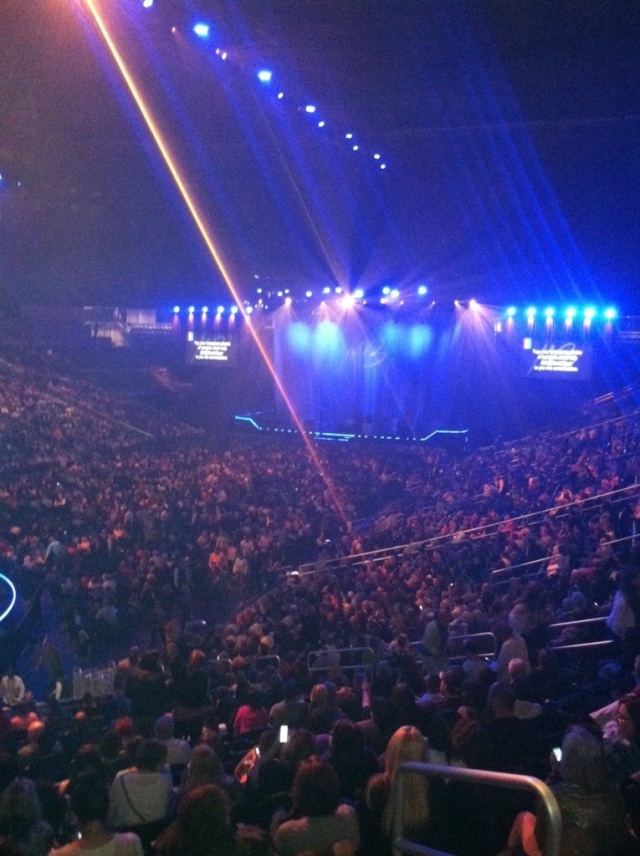 The opening act was a group called Naturally 7. They are an amazing acapella group, turning their bodies into instruments. Really a great way to get the night started, and they came back to sing with Bublé later in the show.

Bublé is now not only one of my favorite singers, he’s one of my favorite people. I have been to a lot of concerts in my day and have never come across someone so genuine. I read a blog saying that when you go to his concerts, you feel like he is crooning just for you, and I absolutely agree with that.

When he first came out, he immediately started interacting  with the crowd. He made mention of some of the signs, even a few way in the back with LED lights on them. One girl had a sign saying it was her 18th birthday, so he brought her down to the stage, gave her a hug and a kiss, and had the whole stadium sing Happy Birthday to her. Right from the get go, the show was about his fans, not him. What a special night for that girl, and what an awesome memory to make. He brought up a little girl later in the show that had a sign for him, and serenaded her with You’ve Got A Friend In Me. Her face was priceless, and he even gave her the mic to sing along with him.

His show was two hours of non-stop action, and he is one of the best live singers I have ever seen. He sang a lot of his original songs, a lot of classics, threw in some Elvis, even sang the new Daft Punk song. Scattered between songs he bantered with the crowd, told stories of his early days singing in nightclubs, and how fame didn’t come to him until later in his life, and how he’s happy about that. He talked about his new baby boy, his wife, and even took a gift from a woman in the front, opening it with excitement, and holding it up for the crowd to see. It was a little Pittsburgh Penguins outfit, and he jokingly replied that it was really nice, but that he would never fit into it. He’s really funny. Much funnier than I imagined him to be, and that took the concert to a whole other level.

He did an awesome section where he introduced every member of his band. The screens, backdrops, and effects throughout the whole show were fantastic, and during this part, each guy’s photo was put up and they performed a solo. Bublé made up funny anecdotes about each guy and it was super endearing to see an artist put so much love into his band, realizing they are just as much a part of his fame, than he himself.

About halfway through the show, Bublé walked through the entire floor section to reach the secondary, smaller stage, where he sang a few numbers. Stupendous for us, as we were really close.

You really feel the utter joy and love in the air at his concerts, with one of the best moments being a huge explosion of heart-shaped confetti fluttering around the entire stadium, as he sang All You Need is Love.

His encore was over and above the normal one song come back, it was more like four songs, and he came out with a new dapper suit, and an energy even higher than before. We were all sad to leave that concert. We didn’t want it to end. And it’s now a tradition for the four of us to go to Bublé  every time he comes back to our City.

So thank you Michael, you are a true class act. Continue to keep making beautiful music. You were born to do it.